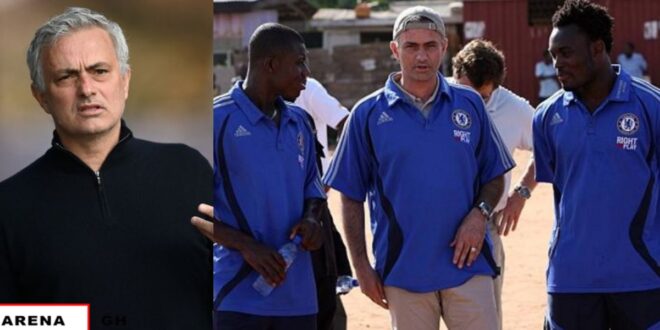 “I will always remember Ghana, I had an amazing experience there”- Jose Mourinho speaks on his visit to Ghana.

Jose Mourinho seems to have a deep love not only for Ghanaian midfielder Michael Essien, but also for the country as a whole.

Essien spent three years at Chelsea under Mourinho before returning to the Portuguese boss at Real Madrid on loan in the 2012/13 season.

To the delight of many, the Ghanaian has repeatedly expressed his admiration for Mourinho, even referring to him as “daddy” on many occasions.

Essien reminisced about the “good old days” with his former gaffer, whom he took to Ghana for a charity function, by posting a picture of the two laughing together on Instagram on Thursday.

Mourinho expressed his love for Ghana by using a heart emoji before the word “Ghana.”

Since then, Mourinho has visited Ghana at least twice more, the second time being during the 2008 African Cup of Nations, which was held in the West African country.

During their time at Chelsea, the pair won the Premier League, the FA Cup, and the League Cup.