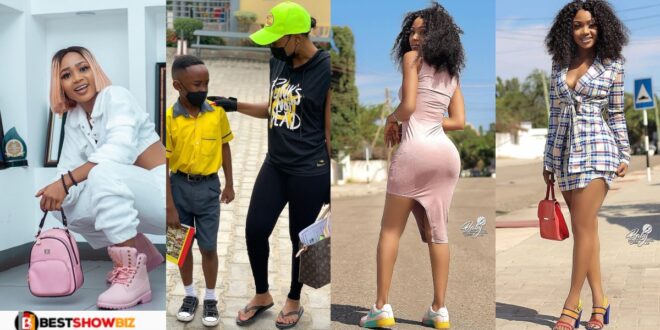 Akuapem Poloo, a Ghanaian actress, and model, has spoken out about her arrests and subsequent court case after posing with her son in a photo.

After her nak3d selfie with her son went viral, Poloo was punished by the Accra Circuit Court.

Akuapem Poloo said she didn’t know the law’s position on her actions during an Onua TV interview with Captain Smart.

My son and I were snapping a picture and I had no idea it was against the law. I had no idea who was behind the campaign to have me arrested. As a result of the fact that we showered with our mothers as youngsters. “I caught a glimpse of my mother’s undies.”

She also believes that her arrest was the result of some sort of conspiracy.

“I also had no idea that anyone had been arrested for what I had done before now. As a result, I was unaware that what I had done was illegal. I had no idea where things were going. Who was responsible for this? What’s going on here, exactly? I would have gone to beg for mercy if I knew who it was. Akuapem Poloo admitted that “from the time we started the court proceedings, I wasn’t myself.”