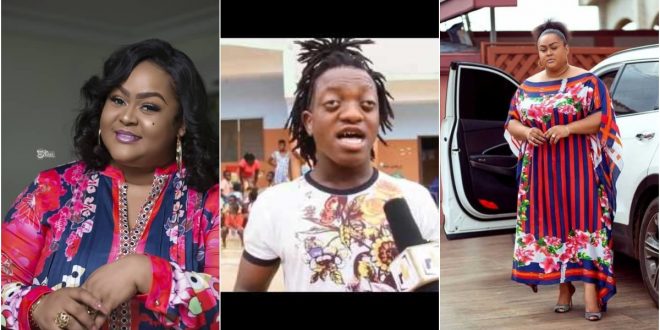 Popular Kumawood actress Vivian Jill Lawrence has revealed she once refused to kiss the actor Yaw Adu popularly Known as Sumsum Ahuofe in a movie scene.

Vivian jill was granted an interview with Nana Romeo on Accra FM where she was to give account on her acting carrier. In the course of the interview, she revealed that she regrets humiliating her colleague actor Sumsum Ahuofe by refusing to kiss him onset.

The mother of two stated categorically that she was very scared to kiss Sumsum Ahuofe because she was new in the industry and did not know anyone at that time.

“I had not seen him before and he was sitting among some midgets so I was scared. Therefore when I was supposed to kiss him, I refused.” said Vivian Jill

She further said that if she gets another role to kiss Sunsum she won’t hesitate to do it since she’s got lots of experiences now.