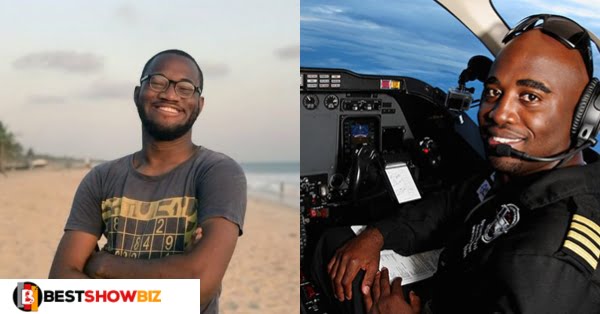 “I was a good boy in school but now Broke, my mate who used to Drink is a Pilot now” – Man reveals

On Twitter, a man who goes by the handle @ deoluwaa and calls himself “Too broke to be sued” made a post that has thousands of people reacting and commenting.

Back in secondary school, he had a classmate who was cited as a classic example of a bad influence on other children, according to him

.“My classmate in secondary school was that bad child they warn you about. Smoking and drinking in school in JSS 2-3,” the man recounted.

Surprisingly, the young man who claims he is currently not well-off revealed that his friend, who used to be the ‘bad boy,’ has turned out to be a wealthy pilot.

He is now a pilot in the United States, with his own plane and company. Emi has the best overall longitude, latitude, and attitude. “However, mi o ti ni bearing,” the gentleman added.

My classmate in secondary school was that bad child they warn you about. Smoking and drinking in school in Jss 2-3.
He’s now a pilot in the US and owns his own plane/company.
Emi overall best longitude, latitude, and attitude. But mi o ti ni bearing.

Read Also  "God has approved of side chicks in marriage because they make men live longer lives." – Counselor Lutterodt

@DanielRegha mentioned:The first duty of a parent is to impact good morals on his or her child so ur parents are right to warn u about smokers & alcoholics; The fact some make it big in life doesn’t change that. Stop comparing ur life with others cos u don’t know what they sacrificed to attain success.

@_deoluwaa indicated: I dont understand the golden nuggets and pseudo-deep takes everyone is having. Kosi moral lesson kankan. This is just banter material. If you like, gift your child a pack of cigarettes on their 5th birthday, na you sabi