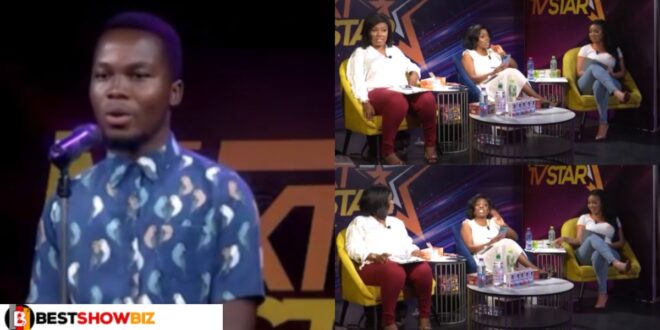 Blogger, Journalist Albert, who should shut up and let things die naturally, has made yet another inane remark that he should have swallowed.

Journalist Albert boldly claimed in an interview with Zionfelix that he wanted to tell Nana Aba Anamoah, Serwaa Amihere, and Bridget Otoo his thoughts but was frightened of being smacked.

The unabashed and unapologetic cyberbully appears to be relishing the ludicrous publicity around his saga, forgetting that, in the end, he will need a job from the individuals he unprovokedly criticizes online.

During the conversation, he also emphasized his undying love for Serwaa Amihere, emphasizing how she maintains her decency on the internet.

Read Also  "I want to marry, I can't do this anymore" - L3sbian begs for breakup with her partner in new video

He chastised Bridget Otoo for consistently defending the NDC, which he considers biased.

He further stated that he believes Nana Aba and his cohorts planned to humiliate him on live television once they discovered he was at the site for the “Next TV” star’s audition.

Fighting Nana Aba Anamoah, Serwaa Amihere, and Bridget Otoo is pointless because they have nothing to lose and hence the combat is uneven. Journalist Albert needs to improve his card-playing skills.