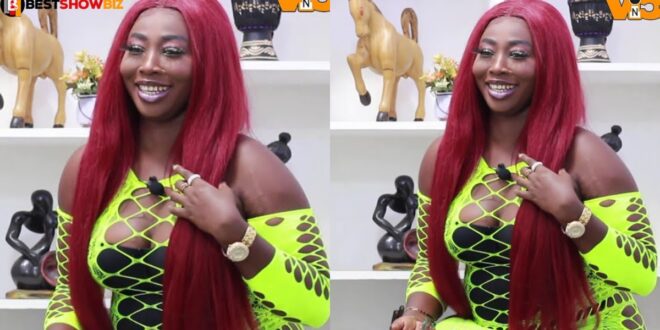 A Ghanaian slay queen has disclosed that she is sleeping with a married man for a reason that has created outrage on social media.

As we all know, slay queens sleep around with married guys for one reason: to live in luxury, but this one claims it’s for the greater good.

Lari the Bosschick, a slay queen, has confessed that her primary motivation for sleeping with married men is to generate funds for an orphanage and the construction of a church.

In an interview with a renowned YouTuber, the slay queen stated that she has no remorse for sleeping with married guys because she knows her husband will also chase women outside.

Read Also  "If your man pay your bills, allow him the time and space to cheat"- Lady advises her colleagues

The selfless slay queen argues that today’s guys can’t be satisfied with just one woman, which is why they seek side girlfriends.

Lari further stated that she is using the money she earns from prostitution towards the construction of children’s houses and a church.