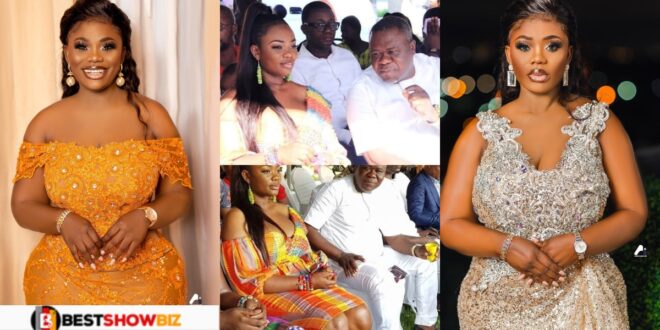 Dr. Kwaku Oteng, the husband of Akua Amoakowaa, also known as Akua GMB, has sent an emotional message to his wife on her birthday today.

Akua, who is well-known for her appearance on the popular reality show Ghana Most Beautiful, is also the third wife of one of the country’s wealthiest businessmen, Dr. Kweku Oteng.

Onua TV’s morning show host Captain Smart revealed that Akua chose to celebrate her birthday at a secret location in Kumasi with a small group of friends and family.

Several reports that appeared on social media suggested that Akua and her husband Dr. Kweku Oteng’s marriage had come to an end.

The business magnate was also said to have seized all of the items purchased for his wife, according to rumors.

Captain Smart appears to have received a message from Dr. Kweku Oteng that contradicts this.

Captain said without missing out a word;

Narnarh Berry have been creating content for blogs which includes Buzzgh.com and bestshowbiz.com, you can contact her via Email on [email protected]ail.com.