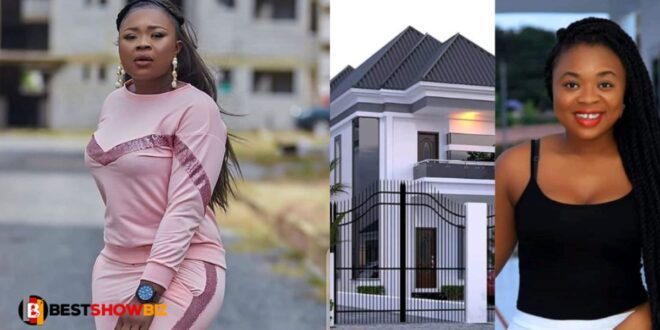 Adu Safowaa, a Ghanaian actress, TV show host, and self-described business mogul, boasted that her four-bedroom house in Accra costs billions of cedis, implying that she is in a league of her own and not just another boss chick.

During an interview with Sammy Kay Media, she made these swagger remarks.

She is very wealthy, according to Adu Safowaa, but she does not like to flaunt her wealth on the internet, unlike other celebrities who post all of their assets on Instagram.

The outspoken actress also listed some of the businesses she owns, including a large cement shop, a water company, and other trades.

Read Also  "I am tired of love; i want money now"- Efia Odo

Adu Safowaa, who has a bad reputation as a disrespectful lady, boasted about her four-bedroom Accra home, which is worth billions of cedis, as one of the few small properties she owns.

Additionally, the actress revealed that the billions of cedis mansion were a birthday gift she gave herself to celebrate her turning thirty-one last year in style.

Clearly, Adu Safowaa boasted about her wealth to mock Afia Schwar and her other well-known foes who brag about their homes on the internet.