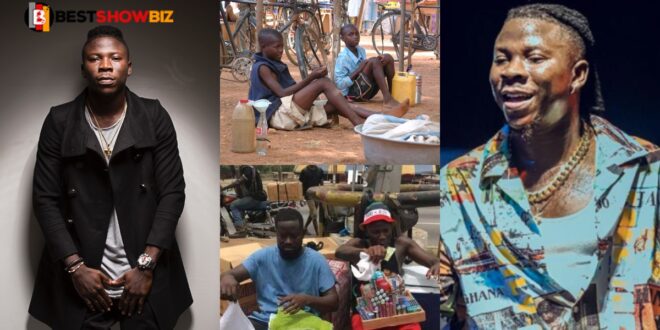 “I sold Kerosene when I was at Ashaiman” – Stonebwoy

Stonebwoy, Ghana’s very own, has disclosed that he used to sell kerosene with his sisters in Ashaiman, near Accra.
When he was a child, his mother worked as a trader in Ashaiman.

“Ashaiman is a very beautiful area in the sense that it is diversified in culture and ethnicity, whereby you have the Ashanti and the Northerners, notably the Ewes because it is closer to the Volta Region,” Stonebwoy told Citi TV in Accra.

“If you lived in Ashaiman or grew up in Ashaiman, you have a predisposition to be tough,” he continued. I also sold [Kerosene]. I once went with my sisters to sell kerosene.

“Anyone who knows me knows that in my house, we sold water to the neighborhood, and my father ran a corn mill.” I’d do it if I could. So, sometimes I’m there grinding maize, and sometimes I go back and pound cassava. I truly want to leave school early so that I may help out.”

Stonebwoy, whose real name is Livingstone Etse Satekla, is a Ghanaian Afropop, dance hall, and reggae musician. He is the President and CEO of Burniton Music Group. He was named Best International Act: Africa at the 2015 BET Awards, as well as Artist of the Year at the 2015 Ghana Music Awards.