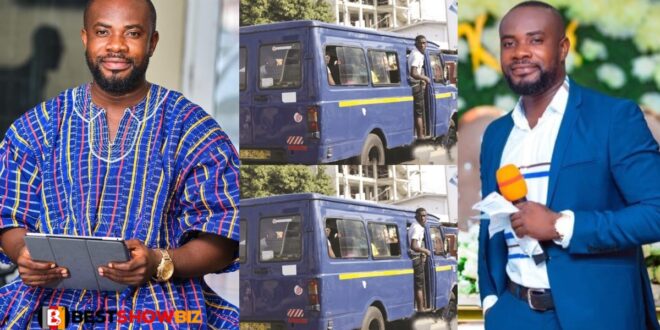 Kwame Oboadie, a popular Adom FM presenter, has reflected on the hard times in his life when he initially went from Kwahu in the Eastern Region to Ghana’s capital, Accra, in search of better pastures.

He sold mangoes and saved for his trip to Accra, he claimed, since he was determined to change his destiny for the better.

While speaking in an interview with Adom TV, Kwame Oboadie said that when he first came to Accra, he had to sleep in a car with a friend at a fitting shop for almost a year.

He revealed that he sent a letter to his uncle requesting permission to travel and reside with him in Accra but refused to provide him accommodation since he(Oboadie) arrived without his reply to the letter..

Read Also  Kofi Kinaata Disclosed He submitted songs to VGMA board but failed to get even One Nomination.

”When I arrived in Accra, my uncle told me he couldn’t accommodate me because he’d not replied to a letter I wrote to him before coming. I didn’t have money to return back home. My uncle left me stranded without money and asked me to go back. H sat in a car and left me,” he recalled.

”I trekked from Kata Hostel at Kwashieman to Abossey Okai where I met some indigenes of Kwahu. I met friends and narrated my situation to them; I didn’t want to go back.”

”A friend I met was sleeping in a fitting shop … after we ate in the evening, he offered me a spot in a car at a fitting shop where he slept. He had already occupied the back seat. We slept in the car for almost a year and half,” he said.