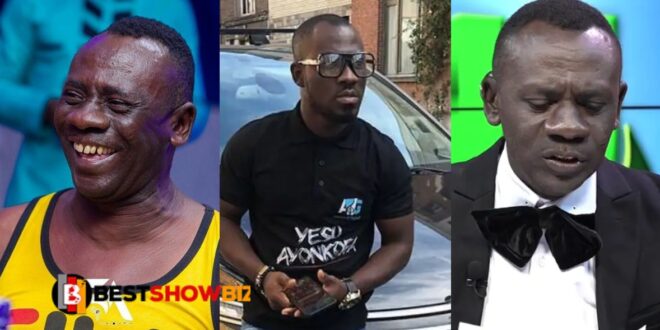 Richard Kwaku Kyere Boadi, the first son of Kumawood actor and UTV broadcaster Akrobeto, has spoken up for the first time about his family.

The attractive young man stated that he did not meet his biological mother until 2016, which was five years ago.
In an exclusive conversation with Zion Felix in Brazil, where the blogger is presently on holiday, he revealed this disclosure.

Richard described how he was removed from his mother at the age of two and given to his grandma, his mother’s mother.

This was due to the fact that his mother was young at the time of his birth, and his grandmother, who was a wealthy woman at the time, wanted her daughter to finish her studies.

He said that the mother was afraid of coming to get him because the father had threatened that if she did, he would no longer pay attention to him.

According to Richard, Akrobeto was content with the grandmother’s care and did not want to be taken away from her.
As a result, the mother, not wishing to play with her son’s welfare and safety, let him stay with his grandma.

Richard said that his father gave him permission to seek his mother in 2016. He recalled Akrobeto going to work in Kasoa and being approached by a young woman who stated, “My mother said we have a big brother and that you are his father.”

That is when it dawned on Akrobeto, according to Richard, that his first baby mother had other children. As a result, he decided to let the child go seek his mother in order to avoid any future misunderstanding.

“It took me about an hour and a half to find my mother.”People did not recognize the name I was mentioning, so they did not realize she was the one I was looking for,” Richard recalled of the day he went looking for his mother.

Akrobeto’s son also stated that his father had three sons, adding amusingly that he has no idea whether his father has any additional sons that he is unaware of.