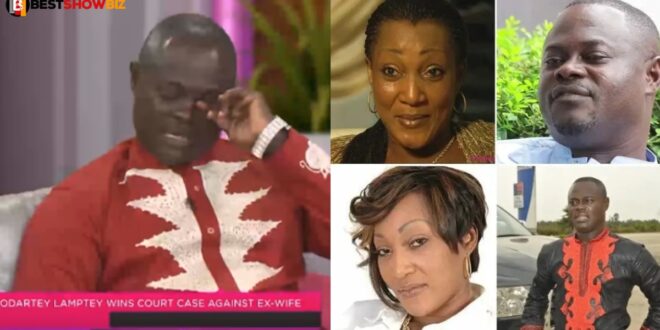 “I pray no man go through what my Ex-wife put me through”- Odartey speaks after winning court case.

Odartey Lamptey, a former Black Stars footballer, has spoken out about the ongoing drama involving himself and his ex-wife, Gloria Appiah.

In 2013, a DNA test revealed that the children he thought were his biological offspring were not. The ex-footballer has been married to his wife for almost 20 years.

He eventually filed for a divorce, which was approved by the court, and some of his holdings were awarded to his ex-wife, who was dissatisfied with the court’s decision and filed an appeal in order to obtain further properties.

Following a seven-year legal fight (main case and appeal), the court maintained their decision, stating that Gloria should accept the properties she has already been assigned in good faith.

Odartey Lamptey has broken his silence in an interview, saying that he has been through a lot during the seven-year court struggle and is grateful to God that it is over.

According to him, the suffering he went through throughout this time was not a pleasant thing, and he would never want it on another man, which has been one of his prayer points.

“I have suffered throughout this period, and I thank God we have brought the case to a close,” he stated. The appeal took three years, which is a long period. I appreciate my attorneys’ efforts in ensuring that I won this lawsuit. No man should ever have to go through such horrible experiences. “

He came to the conclusion that the court had reached a decision, and he is now waiting for Gloria to quit his luxury seven-bedroom East Legon property.

In a recent development, the ex-wife, who has already filed two appeals, both of which resulted in the former footballer’s favor, has announced that she will file a third appeal.