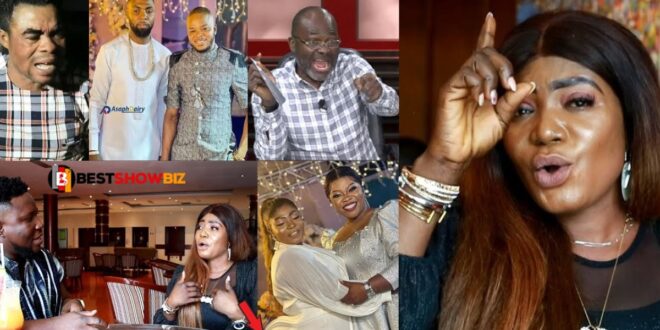 Following the arrest of her husband, Bishop Daniel Obinim, there have been extensive claims that Florence Obinim sought out to other notable ministers of God to beg for forgiveness from Hon. Kennedy Agyapong.

Florence Obinim has denied these reports, which have been widely circulated.

Remember that in April and May of 2020, the Member of Parliament for Assin Central went completely insane and threatened to bring down the founder and general overseer of the International God’s Way Chapel, over his church’s operating procedures.

During one of his regular appearances on Net2 TV’s The Seat, the legislator promised to expose Bishop Obinim with information indicating that the man of God is a cultist and a chronic womanizer, among other things.

Using video, Mrs. Obinim retaliated against Mr. Agyapong and questioned why his behavior constantly leads in him creating lies to discredit people, despite the fact that he has cheated on his wife and fathered 22 children with different women. This infuriated him to the point where he was forced to resort to harsh measures.

Surprisingly, the prominent televangelist was arrested on May 19, 2020, and accused in court with publishing false news and forgery of documents, in violation of sections 208 and 159 of the Criminal and other Offences Act, 1960, and other relevant laws (Act 29).

Kennedy Agyapong acknowledged that he had filed a police report and that he had also provided law enforcement officers with a list of potential witnesses.

It is against this context that rumors circulated that Florence Obinim, who was then based in Spain, wept and begged Mr Agyapong to forgive her and her husband, according to the reports.

Moreover, she claims that the charges leveled against Bishop Obinim were without foundation and that her husband would have been found guilty if he had genuinely committed any crimes.