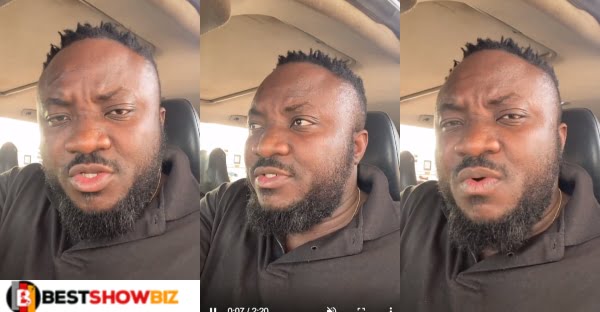 Derick Kobina Bonney, nicknamed DKB, a Ghanaian comedian, has recounted a near-death incident that occurred to him over the weekend.

The country would have awoken today to learn of the tragic death of the divisive personality, but luck was on his side.

DKB stated he was scheduled to play at an event in Kumasi, but he slept at a substandard guest home, which is where the life-threatening incident occurred.

The comedian added that as he got out of bed in the morning, he felt compelled to pray, and he felt that prayer spared him from what was planned for him.

DKB stated that he entered the bathroom to take a bath and got into contact with some damaged electrical lines.

Read Also  After dating for 4-5 years, Graduate rejects boyfriend’s proposal, says he is no longer her type

He said he was electrified and nearly died, but was spared by God’s mercy.

He took advantage of the chance to encourage ‘lost’ individuals to take Jesus Christ seriously because we are living in perilous times.

“I would have died of electrocution today if not for my Lord and Savior Jesus Christ. Please take Jesus Christ seriously, we’re in dangerous times,” he wrote.

His fans asked him to name and shame the guest house and the event company that placed him in harm’s way but the comedian claimed he didn’t want to tarnish their image.

anthropod1: Maybe the details of the facility has to be made known so that their ignorance don’t cost a precious life before something is done about it. If nothing at all, the police should know so that press them to solve it within the next few hours

duke_kofi: This time don’t go in for guest house instead 5 star hotels.

glitteratieent: We are so thankful that you can be here to tell us this testimony. Please be careful and I hope you moved out with that kind of service.