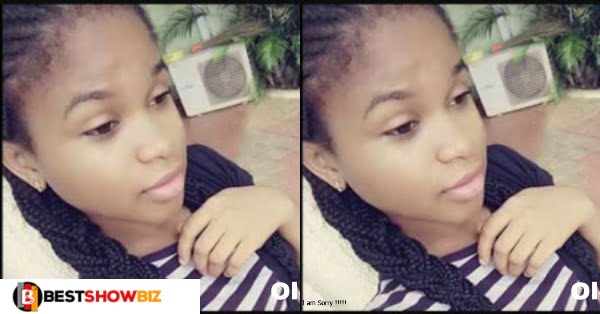 This is the story of a young girl who was posted on social media. She is 24 years old and is presently enrolled in the University’s 300-level program.

The following is her story:

My name is Blessing, and I’m 24 years old. I’m a student at the university studying medicine. I received an invitation from a guy on Facebook, and after checking his profile, I saw that it was a legitimate profile and that he was quite attractive; I am a sucker for attractive men.

We began speaking, and after a few exchanges, I began to fall in love with him through Facebook. I couldn’t believe it when it happened. According to what he informed me, he currently resides in the Nigerian state of Enugu.

And then he asked whether we could see each other one day, which was the question I’d been waiting forever since I fell in love with him.

“He must be wealthy,” I thought to myself as I accepted his offer before he sent me 35 thousand naira for transportation, which convinced me that I had hit the jackpot.

The day had finally arrived, and when I arrived in Enugu, I finally met him.

I wasn’t disappointed since he was quite attractive, with massive muscles and clean beards; the sight of him sent vibrations through my veins, but I was able to keep it under control. He was patient with me and I had a great time exploring the city with him.

When we returned to our hotel room, he brought a bottle of costly alcoholic wine, which I refused to drink because he explained that it was to commemorate our reunion.

As a result of consuming it, I became dizzy and wanted to sleep. I requested that he join me in bed rather than on the sofa, and he agreed.

After a few minutes, he began gently stroking me; I found it to be enjoyable, but I tried to reject it because I believed it was inappropriate to sleep with him on the first day. He went ahead and forced me, and he made sexual contact with me without my permission.

I was devastated and enraged, and I yelled at him, asking why he would do such a thing to me. He became enraged, claiming that he had spent close to 100,000 Naira on me and that I was refusing to do it, implying that I was foolish and wicked. I became enraged and left.

Then he started phoning and messaging me, saying he was sorry and wanted to meet me again, and telling me that he’d been thinking about me and that he was head over heels in love with me, and that I should meet him again.

He has already sent me a sum of 40 thousand naira to cover transportation costs.

I’m looking for guidance on what to do because I still have feelings for him and can’t stop thinking about him on a daily basis.