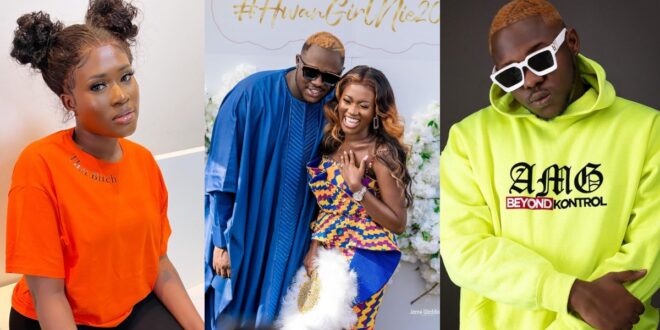 After years of silence, Medikal has now shared the story of how his relationship with the curvaceous actress, Fella Makafui, began as a simple friendship on social media and eventually grew into a lovely marriage.

We all know that the rapper ended his relationship with singer Deborah Vanessa after he fell into the arms of Fella Makafui in the year 2019. The couple later married in March 2020, according to reports.

Unbeknownst to them, their romance would eventually lead to marriage. People who believe Fella kidnapped Medikal from Sister Derby have spoken negatively about their relationship, expecting it to not last long.

Medikal revealed that he met his wife, Fella Makafui, on the popular social networking site Facebook, when speaking with BBC Pidgin about marriage and options. And, according to him, they courted for a longer period of time than most people believe, but it was all done in secret and through intermediaries.

“I met her on Facebook, and we immediately hit it off. After that, I took her phone number and we started conversing. We lost touch for a while, but then we reconnected and began talking again. Yes, we were on and off for a while. That was all there was to it. Then things started to happen, “he explained.

Furthermore, he stated that his decision to tie the wedding with Fella Makafui so early in their relationship was his own decision to establish his life with only one woman.

“I don’t want to stray too far from a lot of things I believe in. I don’t want to be carried away by a slew of different issues. Because I work in the entertainment industry, I know that when we achieve certain levels, we reach our zenith. Someone would enjoy spending time with a large number of female friends. However, I do not share such a viewpoint. Everyone is unique in their own way.

“I have nothing against somebody who has more than one partner in a polygamous relationship. My priorities, on the other hand, are a good family, including a gorgeous wife and children. In addition, I want to amuse people and pursue a career in show business. “

They were gifted with a daughter named Island Frimpong after one year of marriage, whom they consider to be a blessing to them.

Medikal added that he takes parenting seriously by stating that his daughter serves as a source of motivation for him to work extremely hard. They want to be able to provide her with the kind of life they did not have when they were growing up.

Also disclosed was the fact that Fella and Medikal had begun putting plans in place to ensure that their daughter’s future was as bright as possible. They added that a savings account had been established for their child as soon as she had taken seed.

The actress believes she and her spouse are soulmates, and she believes this to be true.