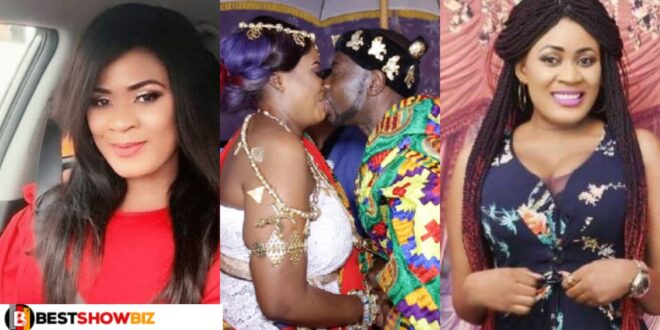 Many people were surprised when news came in 2019 that actress Gladys Mensah Boaku, better known as Nayas, had married her partner in Germany.

This was because, amid her problems with her lover and Gospel singer Ernest Opoku, the controversial star married Nana Kofi Safo Kantanka, a Chief in Hamburg, Germany, just over a month after the two met.

The marriage has either disintegrated or is on the danger of dissolving two years later, according to rumors that Nayas has been thrown out of her matrimonial house by her husband.

Following the terrible turn of events, many have speculated as to what may have prompted Nayas to say ‘YES I DO’ to the German-based ‘borga’ whom she barely knew.

In a viral audio recording, Nayas claimed that she chose to marry her divorced husband after he promised to pay her a pittance of 500 Euros every month.

Apart from the monetary promise, she declared categorically that nothing about her then-boyfriend drew her to go down the aisle; nevertheless, when they eventually settled down as a couple, he never kept his word.

Nayas underlined that after the marriage, the only money her husband could provide her was GHC250, which he sent down to her as pocket money while he was stationed in Germany.

Listen to the audio in the player below.