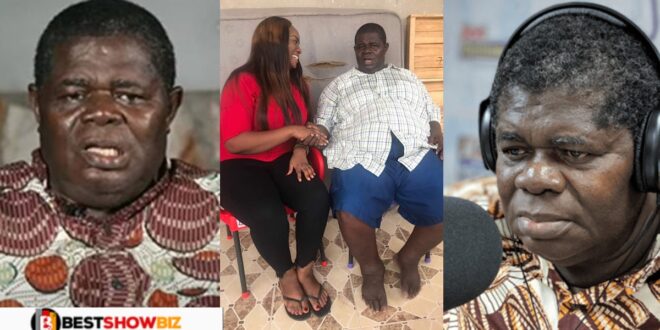 “I married a beautiful woman with bad Character”- TT explains how he became so poor.

Psalm Adjeteyfio, better known as T.T of Taxi Driver fame, has spoken out once more about the circumstances that led to his current position.

The actor recently drew popular sympathy after revealing in an interview that his rent was due and that he required GHC3,000 to pay for a 6-month advance period.

T.T, on the other hand, did not deserve sympathy, according to several of his coworkers, because he did not plan his future adequately.

Mr Beautiful, a Kumawood actor, recently stated in a discussion with Sammy Kay that Rev Badu Kobi gave T.T a large sum of money to help him build his own house. However, it appears that he spent the funds and returned to ground zero.

T.T denied the allegations, claiming that he only received GHS6,000 from Prophet Badu Kobi, which was insufficient to build a two-bedroom house.

Psalm Adjeteyfio said in an exclusive interview with Kwabena Boafo on Happy FM that his ex-wife also made it hard for him to spend the money wisely once he received it.

He accused his ex-wife of tricking him into using half of the money to rent a whole house and the rest on “useless” items.

TT also stated that his wife took his children away from him and that he was powerless to stop it since she had complete control over their relationship.

According to reports, he said

“She was impatient and always wanted things done her way and was always getting me angry. She always did what I did not like so there was no peace and joy in our home. It was always full of misunderstandings.

“If you have no peace in your house, it becomes evident in everything you do and this was my story when it came to my wife. She always did what I asked her not to do and that really got to me”.

“I did not abandon my children. I just had to give them space because of my wife’s actions and I did not want what was happening to us to affect them. I really appreciate them and all they did, especially my eldest son Ezra. They all stood by me in my struggles all these years.”

TT also had a powerful message for men who value women’s appearance above their morals. He suggested that marrying an ugly lady with a decent character is preferable to marrying a beautiful woman with the devil’s soul.