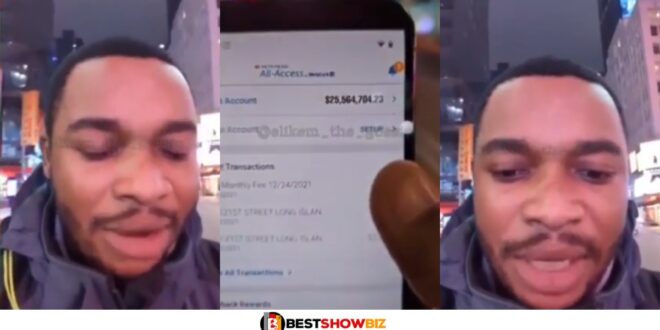 Twene Jonas, a Ghanaian living in the United States, has disclosed how much money he made in 2021.

In a video that has gone viral on social media, the controversial Ghanaian, who has consistently criticized the current and former governments of Ghana, said that he made over $25 million this year.

Twene Jonas claims that despite the fact that he spent a lot of money on luxury, his year of hard work paid off. Twene Jonas used the banking software on his cell phone to reveal the amount of one of his bank accounts to back up his claims.

According to him, he made all this money after doing away with unnecessary prayers, opposing that God doesn’t bless people but rather hard work.

Read Also  6 yahoo boys d!e in car crush with the car they bought and were celebrating with (video)