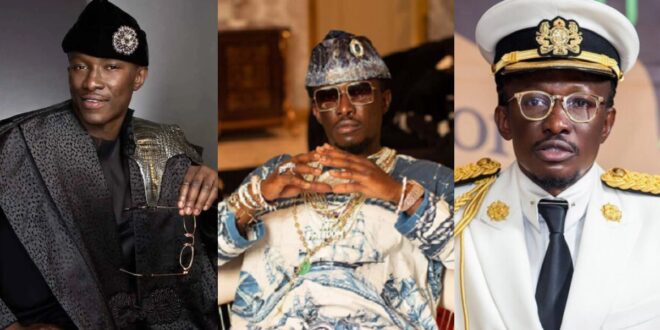 Nana Kwame Bediako, also known as Cheddar an entrepreneur in real estate, has once again recounted some of the anecdotes from his humble beginnings in order to serve as an example to younger generations.

He said that at the age of 21, while studying in England, he made his first million.

Freedom Jacob Caesar shared the story of how he started his little business in the trunk of his car while he was still attending college.

He also discussed how he created a comfortable living by peddling counterfeit versions of Versace and YSL’s apparel.

“When I was 21 years old, I made my first million dollars, and I’m going to tell you exactly how it happened. While I was attending college in England, where I was living at the time, I ran a side business out of the trunk of my 205 GTI, which I had purchased for 499 pounds, selling counterfeit YSL and Versace clothing.

“I had a total of US$6,000 in my savings when I traveled to London. My mom, my brothers, and everyone else gave me 130 pounds. They said it was a lot of money for me, but I was laughing to myself… I acquired a Panasonic chip phone in 1994, and at the time, I was essentially the newest kid on the block because of this. I remember the year very clearly.

“Johnny Prescott sold jeans and tees. I wanted to buy one pair of pants and one pair of shit, but when I saw the prices, 30 and 20 pounds, I offered him 20 pounds and 15 for the shirt and sold them for 50 and 40. I started making money from the boot but fell into the streets because I knew business.”

When asked about his entrepreneurial endeavors, Nana Kwame Bediako also mentioned buying pieces of scraps from salvages. He said this helped him generate a respectable wage, which he eventually parlayed into a million pounds by the time he was 21.

“A company’s starting can be in a shady area; what matters is that you turn things around and build a solid foundation for your firm.”

the naked truth of Freedom Jacob Caesar is coming out in the book that is about to come out,” he said in a motivational message to the public.