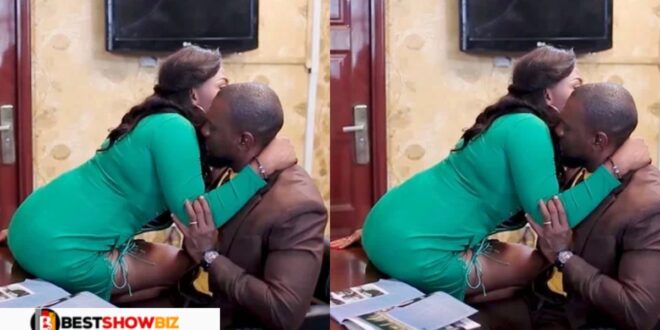 “I love my husband but my co-worker is better in bed, I enjoy him more”- Lady reveals

A woman who has been married for three years, reveals that she loves her husband but is also attracted to her coworker, who gives her more attention than her real husband, and she wishes she could have married him instead.

She is married for the love of God, but she has a crush on a coworker.

What do you believe was the cause of this? Is it because the man is uninterested in her? Is it the result of something else?

She reveals that she is drawn to the coworker because he treats her to ice cream and other pleasant activities, makes her laugh and takes her to the movies, all of which her own spouse does not do.

After having previously committed myself to a man, I had never imagined being attracted to a coworker. I was a traditionalist when it came to marriage.

I went forward with the planned marriage despite the fact that none of my friends or cousins desired it. My husband and I met on a matrimonial website, and he came over to my house following the initial conversations between my mother and his.

He’d been given a rose arrangement and chocolates. To me, that was endearing. Even before we met, he seemed to be smitten with me. It was almost as though he was making an attempt to seduce me.

He did it in front of our families, too. To be sure, that was flattering. I answered yes when he asked. And he, too, replied affirmatively.

We decided on a wedding date immediately; we’d get married in a year. He brought me to dinner parties, restaurants, and even the cinema in the meanwhile. It seemed like a scene from a movie. And every time we met, he would always bring me flowers and chocolates.

I thought his unusual romantic gestures to be the most charming aspect of him. He’d come with me to the store and refuse to let me pay. Outside of beauty salons, he’d wait for me.

He’d come to pick me up after school (I’m a teacher). He was never obtrusive in my life, but he did make an effort to assist me.

Needless to say, I fell in love with him right away, and when the time came for us to marry, it was not for the sake of marriage. It was never in the cards for me to fall in love with a coworker after a few years.

My spouse is still as romantic as he was when we married two years ago, and trust me when I say that he is incredibly romantic. He adores me as much as I adore him.

Our lovemaking is gentle and lovely as well. And everything is in working order. So far, so good, until I developed a strong affinity for a coworker.

A new cricket coach was just appointed at the school where I teach. In his youth, he had competed in the Ranji Trophy. He’s probably in his forties now, and he’s adored by all of the pupils.

I’m in the same boat as you. He’s a swagger. He, too, is indifferent to the opinions of others. With a strong frame and short grey hair, he’s an excellent cricketer. He’s single, and I think dating in your forties is difficult.

He generally keeps to himself, except when he goes to the library after lunch. He is a sports fan who enjoys reading sportsbooks and periodicals.

He’s even asked for a huge number of further books on the subject. Some students approach him, and he instructs them on how to play cricket. They discuss the players and who committed which errors.

I’ve managed to get out of too many after-lunch classes, and I, too, wind myself at the library. It’s fun to watch him. No one has observed anything except Mr. Cricketer.