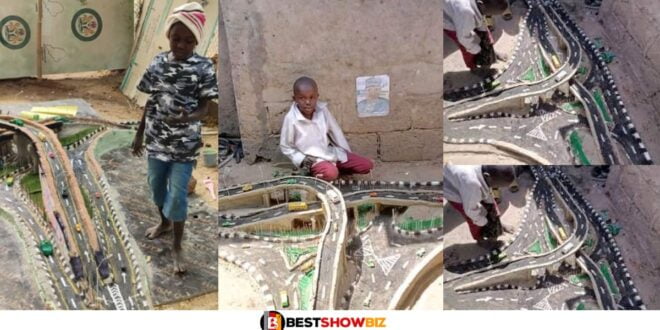 “I Know My Son Will Be Somebody in Future”: Mother of Viral 13-years-old Boy Who Created Borno Flyover

Musa Sani’s mother, Hafsat Sani, revealed that her talented 13-year-old son did not learn to mold from schools or textbooks.

Musa went viral after constructing a replica of the Borno overhead flyover, and as a result, the state governor awarded him a scholarship.

Musa told Daily Trust in an interview that he was inspired to make the replica after his mother showed him one day.

The self-taught artist stated that he molds any beautiful thing he sees, and the flyover piqued his interest.

“When I see something beautiful, I mould it.

“Like when my mum took me across the custom flyover, I loved the view. So, I went on my own one day, took a critical look at it and came home to look for materials to mould it,” he said.

Musa’s mother also revealed to the media that he began designing at the age of five.

Hafsat stated that she began purchasing molding materials for him after admiring his beautiful creations.

She expressed hope that the young man will develop into a great personality in the future.

“When I noticed the beautiful works, I started buying materials for him but children destroys it.

“…I wish we have a big house where there is an open field so he can continue moulding things.

“I know he is going to become somebody in future so I can pray for God’s intervention so I can take care of him and my other kids.”

A Nigerian tweep with the handle @OvieNews announced on Twitter that a construction company, Ronchess Global Resources, has offered Musa a university scholarship to study in the United States.

Read Also  Money no be problem: Anita's earrings she used for her wedding cost Ghc 40,000 (Photos)

According to @OvieNews, the company’s CEO contacted him, and the construction company also gave Musa’s mother N1 million to start a business, while his father was given a job.