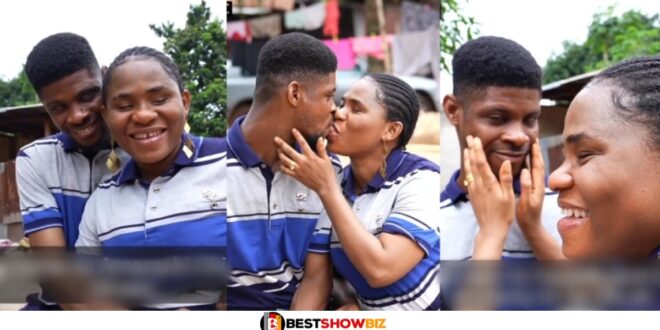 A woman who is visually challenged and is married to a lawyer who is also partially blind has stated that despite the fact that she cannot see her spouse, she is confident that he is handsome.

In a recent interview with BBC News Pidgin, the unusual couple talked about how they met and fell in love. Their marriage made news earlier this year.

The woman, who has been identified as Amarachi Onyekwere, and her husband, had a son in the same year that they went through the traditional wedding ceremony.

When asked about her deepest desire, Amarachi revealed in the interview that she would be overjoyed if God granted her dream to be able to see her husband and son.

However, she did mention that the reason she believes her spouse is handsome is that she has experienced the sensation of touching and feeling his face.

The mother of one said that her husband’s family didn’t like them getting married and wouldn’t bless it because she couldn’t see. in spite of everything that could have gone wrong, her husband remained steadfast and continued with the wedding plans.

The man who was speaking thanked God and added that he loves his wife very much since she is very industrious and performs things that some ladies who have good eyesight are unable to achieve.

The couple is reportedly expecting their second child.