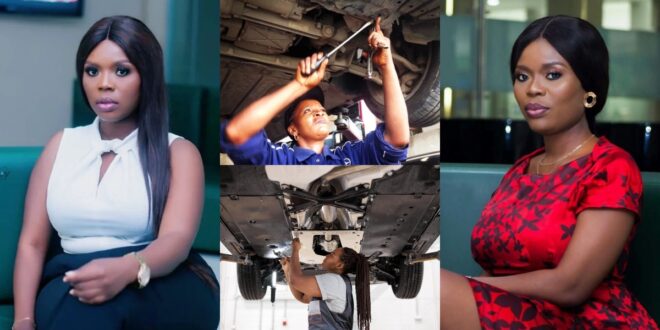 “I have suffered in life, i even worked as a mechanic when my family cast me out”- Delay (watch video)

Deloris Frimpong Manso, also known as Delay, has revealed that she was cast out of her home because she was considered a witch.

As a guest speaker at Refined Vessel Church International, she told her story and talked about the hard times she had to get through to succeed.

Deloris said that no one in her family, not even her uncles, had ever shown her love when she was a child.

She claims that during a recent visit to the United States, she met with an uncle who told her that another uncle had warned him not to play with Little Delay because she was a witch.

The bullying continued at the secondary school, when a senior made an announcement to the other students, claiming that there is a new student from Nkawkaw named Deloris, and that she is a witch.

Because of the allegations that she was practicing witchcraft, her own aunt kicked her out of the family home.

The defining moment came when she found herself in a mechanic shop and admitted to herself that she was the only person who could alter the course of her own story.

She promised herself that she would go after her own success, and the first thing she did was pray to God, who put her in touch with the people who could assist her in achieving her goals.