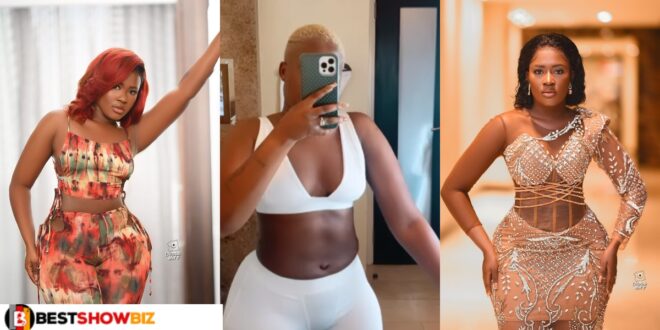 Fella Makafui has reacted angrily to Ghanaians who have accused her and her husband of defrauding to acquire their new home.

Fella has written a lengthy and heartfelt post to let people know that she has suffered and worked hard to get to where she is today in life.

The couple invited their blogger friends to accompany them and document everything in their new home.

Their gorgeous home is enormous, with many rooms and a swimming pool.

The word ‘Island,’ the name of the couple’s kid, had been written on the inside of the pool.

Because it’s strange to conceive of a B-list rapper and an actress who rarely acts buying an enormously costly property less than two years after marrying, social media users began asking questions.

Ghanaians hesitated to believe the couple could afford such a large sum of money and accused them of fraud.

Medikal has long been accused of being an internet scammer, so people assumed that’s how they got the money for the mansion.

In a type of retaliatory move, Fella resorted to social media to remind Ghanaians that everything they have comes from hard labor.

They’ve worked too hard and suffered too much, she claims, for people to blame their success on something else.

Check out her rage against social media users below the post.