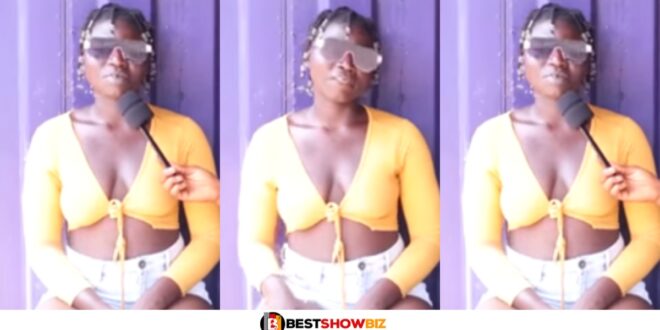 A stunning young woman from Ghana who began having sexual encounters when she was still a teenager has taken to social media to tell her story, which includes some of the challenging situations she has faced while working in the adult entertainment industry.

The woman, who is still working in the hookup industry, admitted as much during an exclusive interview with DJ Myame on SVTV. She said that she has had sexual encounters with more than a thousand different men.

According to her, the majority of her clients are from Ghana, but she does occasionally interact with people from other countries, such as Nigerians, people from Lebanon, and others from across the globe.

When talking about how some of her customers have treated her unfairly, she told a story about how she was tricked into going to a man’s house and sleeping with him. After that, she was forced to sleep with seven other men who were also in the house.

She was not compensated, and she was forced to flee the house like a thief, despite the fact that she had slept with all eight of the guys.

She commented that she can’t quit the hookup industry since she sells her body to pay for her rent, food, and other necessities. This was in reference to the fact that she is still working in the business despite the risks that are associated with it.

The majority of the women who work in the adult entertainment industry got their start in the industry because of negative influences, and as a result, their lives have grown more difficult and less promising.