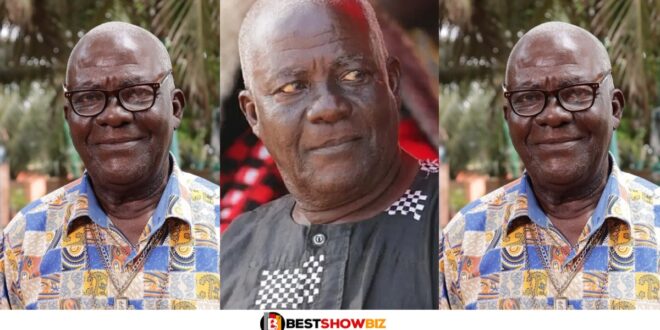 Paa George, a well-known Ghanaian veteran actor, has shared his story on how popularity led to him having sexual encounters with many women.

This information was divulged by Paa George during an interview that was broadcast on Pure 95.7FM. According to him, by that time he had a healthy libido and was involved romantically with numerous of the women he worked with.

The actor mentioned that he began engaging in sexual behavior with other women back in the 1950s, when he was in the fourth grade.

“With that, God was good to me. All the ladies I met were not troublesome. I even met a white lady; it’s not as though she was troublesome but she was jealous. She’s no more. We were all members of the brigade,” he said.

“I had affairs with some female members of the brigade. In fact, during the Concert Party tour, I was the only man who had two women. When we lay the mat, I lie in-between them; you don’t come to me when it’s not your turn. That was the convention instituted by me,” Paa George said.

“That’s me! If it’s not your turn, you don’t get closer; rather, you sleep even if you’re not sleepy. I have had my time.” Asked if he is a changed man now, the 85-year-old veteran actor said “it hasn’t been so long.”

“When you’re young, you always want to explore. Whether morning, afternoon or evening, your libido is high. But now, sometimes, I get one [erection] once a week. Sometimes, I even forget I’m holding my phone. Age has caught up with me. I can pick up my phone to make a phone call and forget who I was about to call,” he concluded in the video below.