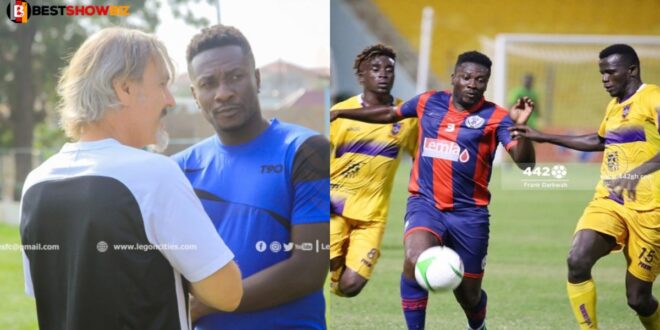 “I have not retired from football, I still want to play for black stars”- Asamoah Gyan

Asamoah Gyan, the former Ghana captain, has denied claims that he is considering retirement from football.
As a result, Asamoah Gyan has stated that he is not finished with football and is working to return to the top level, including playing for the Black Stars once more.

“I haven’t given up football. Despite several injuries last season, I intend to continue playing football. In an interview with Kessben FM, he said, “I could wake up one day and declare my retirement from football, but for the time being, I remain active.”

“People will criticize me, but all I want is to return back to my natural form and weight. If I am unable to do so, I will call it off. But, for the time being, I’m focusing on myself in order to lose weight.

“When I returned to Legon Cities, it was evident that things had not gone as planned since I had gained weight, but I am giving myself another season and am confident that I will be back in shape. And I don’t think I’ll be overlooked if I’m on my game. But not now, not for retirement.”

As a reminder, Asamoah Gyan, 35, has not played for Ghana since competing in the 2019 Africa Cup of Nations (AFCON) in Egypt.

After joining Legon Cities, Gyan returned to the Ghana Premier League ahead of the start of the 2020/21 season.

While the move aroused excitement among local football fans, the striker’s appearances were limited to only six due to a series of minor injuries.