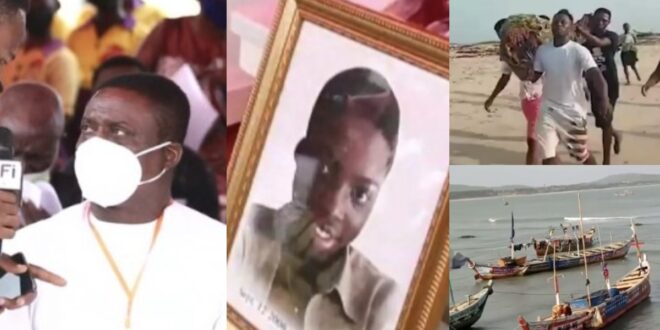 Seth Narh, the father of one of the children who drowned at Apam Beach, is still in shock about the death of his son, Benjamin Narh.

Mr Narh, who is based in Spain, appears to have arrived in Ghana a few weeks ago with the now-deceased and his twin brother scheduled to join him.

“I have visited Ghana many times, but this is the first time I am coming to take my boys abroad, but the unimaginable occurred,” he said.

“I have finished all of the papers and have already bought a ticket for them, so we should have arrived by now,” he lamented. “Unfortunately, I have lost one,” he said.

Read Also  So Sad! Father of the girl who had 7As reveals how she mysteriously died

He revealed in an interview at the mass burial on Tuesday, March 16, 2021, that he now has no choice but to go with the other twin.

“Because of what has happened, I have had to cancel our trip, so I will be traveling with Benjamin’s twin brother,” Mr Narh said.

On Sunday, March 7, 2021, the deceased was one of approximately 20 teenagers, aged 13 to 17, who drowned after swimming in the sea at Apam, in the Central Region.