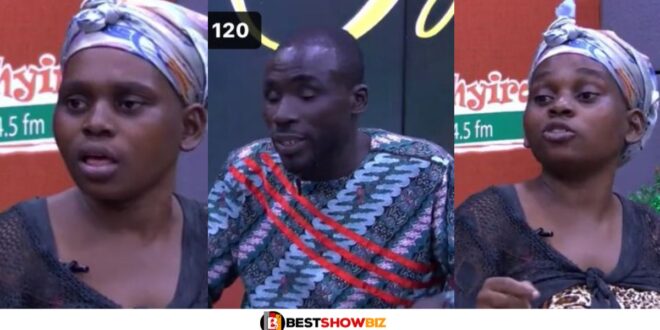 This afternoon on Nhyira FM’s Obra program, a man named Osofo refused to accept a pregnancy despite admitting to having slept with the lady multiple times.

He informed today’s presenter, Nana Ama, of his plans. The man is a native doctor who practices indigenous medicine, but the locals call him Osofo.

He claims he is rejecting the pregnancy because he believes the wife had an affair with another man.

He claimed that the woman told him she was going to visit her ailing sister-in-law, but instead went to a different guy and stayed for over two months.

He further stated that, according to his calculations, even if the pregnancy is his, it should be 7 months old rather than the 9 months the lady claims.

Read Also  I’m Bigger, Better And Far Ahead Of Shatta Wale Because I Have Both BET And IRAWMA Awards – Stonebwoy Claims

This is due to the fact that once the lady returned from her two-month stay, he did not touch her for the first two weeks, which is why he believes in his estimates.

He will, however, promise to care for the woman until she gives birth and then conducts a DNA test. The woman is now 9 months pregnant and on the verge of going into labor.

We’ll wait till she gives birth, and then after the DNA test, we’ll all know the truth.