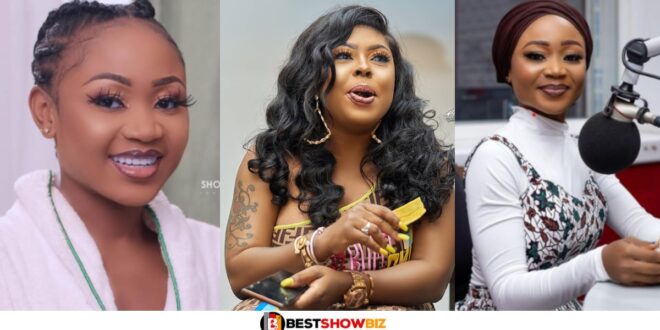 Rosemond Brown, better known by her stage name Akuapem Poloo, is an actress and social media celebrity based in Ghana.

She just provided an explanation for why she has blocked Afia Schwarzenegger on all of her social media profiles for the past three years.

Akuapem Poloo stated that the insults rained on her by Afia Schwarzenegger really broke her heart, especially when she directed her rants towards her mother, during an interview with the ace presenter, Andy Dosty on the Daybreak Hitz morning segment.

She claimed that the insults Afia hurled at her mother had a profound effect on her emotionally, and as a result, she had no choice but to block Afia across all of her social media accounts.

She went on to say that Afia Schwarzenegger has been on her block list for the past three years, and that she has no plans to unblock her in the near future due to the hurt that she suffered as a result of the insults that Afia had directed at her.

“The insult on social media that broke my heart – the one Afia Schwarzenegger insulted my mother really affected me. That led me to block her on social media and she has been in my block list for the past three years“, she said.

Read Also  "Don't envy a rich man, get close to him and ask him how he got his money"- Kennedy Agyapong advises youth (video)