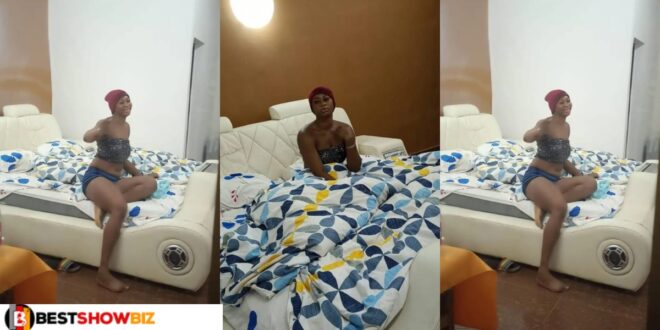 Many individuals would tell you that life is about creating something for yourself and enjoying it without being interrupted by others because the things you gain belong to you and not to someone else.

This lovely lady may have been at a hotel several times, but because she did not pay for it, she has no right to brag about it. However, she has decided to share her modest victory with the rest of the world.

Chun Li Damilovato, a Nigerian lady, has turned to the prominent social networking platform, Facebook, to blast her horn after paying for a hotel with her own money.

Read Also  Former MP for Ashaiman reacts to his name been mentioned by a Taxi driver who said he k!lled for him

She was clearly pleased with herself as she shared images from her hotel room with her friends and the rest of the world.

She appeared very thrilled in the images, implying that she had paid for a hotel stay with her own money for the first time.

Sharing the photos she wrote, “First time to lodge hotel with my own money 😂😂😂😂

Take a look at the photographs below…