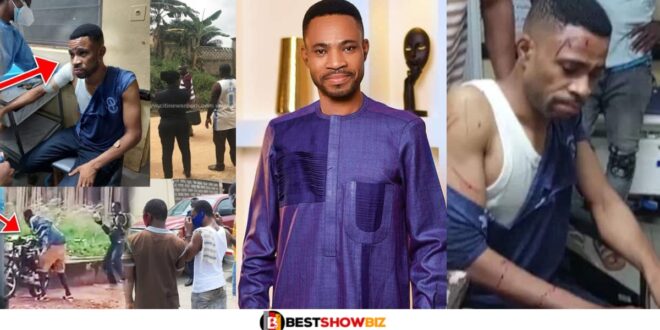 Two months ago, Kofi Adomah was attacked by a group of assailants, and he was nearly burned to death as a result of the incident. He has now officially spoken for the very first time since the attack.

These assailants, who have not been recognized, came very close to taking the life of the talented radio and television host. They damaged a portion of his arms and face with a knife and strong blows to the head and body.

After spending several weeks in the hospital for treatment, the Chief Executive Officer of Kofi TV has now made a full recovery from his illness.

On his show, Kofi TV, Kofi Adomah discussed the events that transpired with him. He said that the attack was so horrifying and traumatic that he thought he would have died by now.

According to Kofi Adomah, getting into details about what truly occurred to him makes him feel uncomfortable. For this reason, he has opted not to shed any further light on his experience with the thugs.

“I have missed you all a lot, many of you keep calling asking how I am faring. By God’s grace I am well, God is with us. Life’s journey entails downfalls, if it spills, you collect it again and soldier on, that is life.

“It is true that I had a serious attack, speaking about it is unpalatable and it reminds me how close I came to death. When it happened, with the police and some well-wishers coming to me at home, I always listened attentively to them,”

“It was scary to the extent that if he had died, that would effectively have been how his funeral would have taken place, So, it gave me an awakening and made me alert to keep my steps calculated. I am well and the remaining is in the hands of the police.”