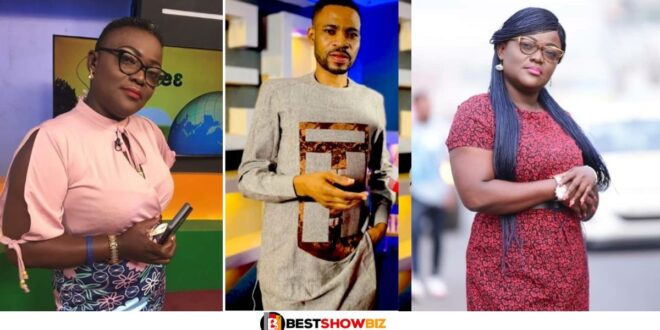 Nana Yaa Brefo, a well-known figure in the media, recently revealed that she and her fellow journalist colleague Kofi Adomah engaged in some shady business dealings.

She allegedly used to find girls for Kofi Adomah, who is widely known to be a womanizer, to have sex with and pay them once they were done. This information was provided by the radio presenter working for Angel FM.

During an appearance on Facebook live, Nana Yaa Brefo confirmed that the incident occurred years ago when they were both working at Adom FM. However, she claimed that she was unaware that Kofi Adoma was married at the time that she was providing girls for him.

“Yes it is true, I admit it. I have done it once or twice. The honest truth is that I never knew he was married and at that time, I was working with him at Adom, and I heard he was married. I never saw him wear a ring and he never spoke to me about any wife or girlfriend. So that is my answer, I wasn’t aware of his marital status,” she noted.

Read Also  "I have had enough of media work, I want to quit and sell Pizza"- Nana Yaa Brefo

Nana Yaa Brefo was not spared as a large number of dissatisfied feminists criticized her for assisting Kofi Adomah in cheating on his first wife, Victoria Exornam Kpodo, which ultimately resulted in the breakup of their marriage.

As a result of her support for Kofi Adomah, many people have referred to her as a hypocrite and have called her nasty; some have even demanded that she withdraw and apologize for her views. However, she continued to insist that she has nothing to apologize for to Kofi Adoma’s ex-wife.

“I will not apologise to Kofi Adoma’s ex-wife. I will not. I have not done anything to go and apologise. I don’t know her,” she said.

She maintained that she had never caused Kofi Adomah’s first wife any harm in any way, and that it is unreasonable for people to demand that she apologize to her because of this fact.

She went on to say that she would not succumb to the pressure and apologize to Kofi Adomah’s first wife, even if the entire country of Ghana came for head.

Nana Yaa Brefo ordered the individuals who were pushing her to apologize to Kofi Adomah’s first wife to quiet up because she believes that they do not have a good understanding of what took place.