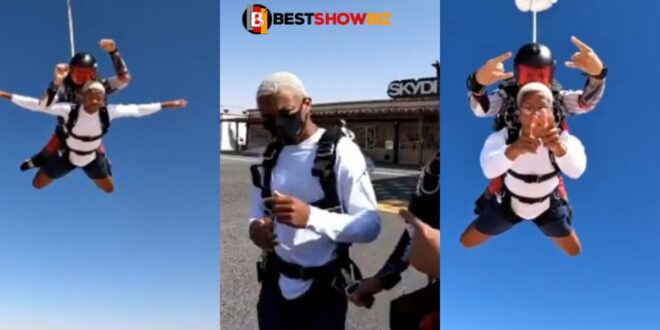 “I flew with the birds, i will be going to space soon”- Kidi reveals after he went sky diving (video)

Kidi, a Ghanaian musician, can be seen in a video making waves on social media having fun as he goes skydiving.

In the footage the “girl dem sugar,” as he is commonly recognized by all, chose to go the extra mile by skydiving with a man who was training him how to do it.

Kidi, who appeared to be doing it for the first time, handled it like a pro, posing for the camera after jumping out of the plane while it was still in the air.

Netizens, including celebrities like Berla Mundi, who saw the video praised him for being so brave to accomplish something that most people are afraid to do because of the height.