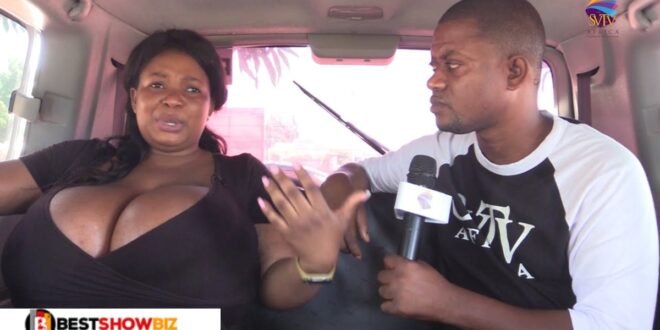 Joyce Addo, a Ghanaian socialite, has confessed that her boobs obstruct her eyesight while she is in a brassier and recently caused her to slip down a staircase.

Joyce, also known as Busty GH, told DJ Nyaami on SVTV Africa that she is unable to see clearly unless she is not wearing a bra because of the size of her boobs. Joyce went on to say that she spent weeks in the hospital after a minor injury.

“One problem that I face mostly is that I find it difficult to see while walking. Normally, you should see as you walk but unless I walk halfway or slanted. Unless I’m not in a bra because it covers my view. My family members are aware,” she disclosed.

Busty went on to say that she had recently fallen down a stairwell for the similar reason. “Especially when I am climbing or descending stairs,” she explained. I could not see the stairs while descending, so I fell and spent two weeks in the hospital. They had to see it up because I had a wound on my head.”

Joyce, who is now known as Her Excellency, went on to say that she had to change her social media identities because someone was impersonating her and stealing money. She has warned her followers to be cautious of such individuals.

Please see the video below for the entire interview.