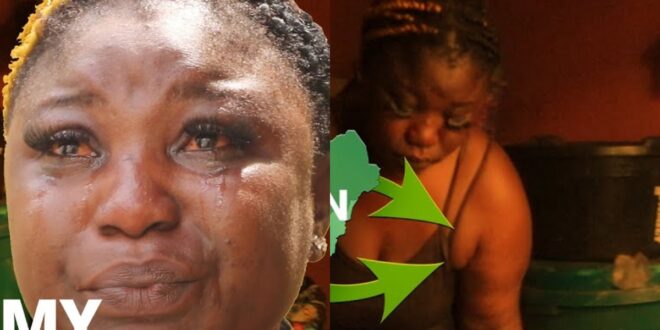 “I don’t want my children to be like me, I do prostitution to take care of them”- Lady cries as she shares her story

Esohe Akonedo, a Nigerian woman, recounts her ordeal in Libya while attempting to migrate into Europe.

According to her, she had four children for two men who abandoned her with the children, leaving her with no alternative but to consider traveling outside of Nigeria in search of greener pastures.

She stated she had to move to Libya in quest of greener pastures to ensure that her kids were taken care of because their father abandoned them.

According to her, she had to borrow N600,000 to travel and has yet to repay it after more than a year.

After she agreed to swear an oath with juju, she was given the money.

She said that they were robbed by armed bandits who attacked their vehicle and even raped her while on their way to Lidya.

Things got so bad that she had to drink her own urine because there was no water everywhere in the desert.

She had to become a prostitute to pay her rent and other bills when she finally arrived in Lidya.

She went on to say that if circumstances get rough for her, she turns to prostitution, even in Nigeria.

She further revealed that she wasn’t able to travel to Europe because she got deported after the police found out she was involved prostitution in Libya.

Her four children have stopped attending school because she is unable to pay their fees, and they are now living with her mother.