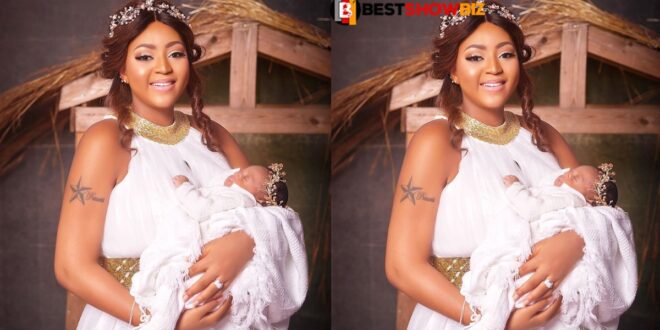 Is Regina Daniels revealing that she is expecting her second child? When it was reported yesterday that the actress had been brought to the hospital for the third time in a short period of time.

She had previously published photos of herself after undergoing surgery. She never revealed the nature of the operation to anyone.

She was then taken to a hospital after claiming to be ill. The third was the subject of yesterday’s news.

Her fans expressed their concern for her and shared their thoughts on social media. Some speculated that she was pregnant, while others believed she was visiting hospitals because she was not eating well and was taking so many slimming pills.

It appears to be one of the numerous thoughts that her followers have. Regina uploaded a photo of herself after she was admitted to the hospital.

She claims she will not have a daughter till she retires since her current attitude is so out of control that she can not manage another.

Fans believe the tweet is her method of informing us that she is expecting her second child as a result of the post. Baby Munir would be a big brother to a sister in no time.

It is still unverified, so we are keeping an eye on her to see what she does next and see if we can derive anything useful from it.

Regina already has a son, Baby Munir, who celebrated his first birthday on June 26th.