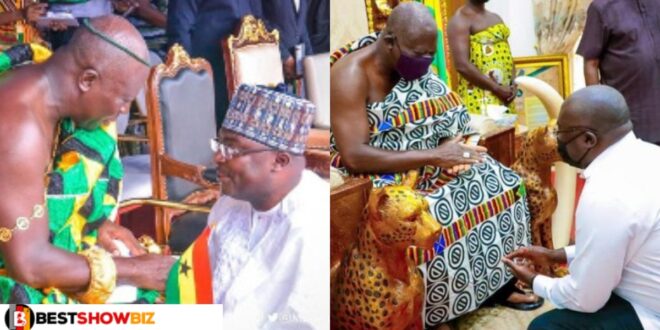 “I don’t have a father nor a mother, you are my everything” – Bawumia tells Otumfuo

On Thursday, November 11, 2021, Vice President Dr. Mahamudu Bawumia led a delegation from his family to the Manhyia Palace to thank the ruler of the Asante Kingdom for the generosity Otumfuo Osei Tutu II showed him during his mother’s demise.

The vice president, who was leading a family delegation to the Manhyia Palace, said he was overwhelmed when the palace sent a delegation to Mamprugu to witness the final funeral rites of his mother, the late Hajia Mariama Bawumia.

“We came to express our gratitude in our fathers’ house, and I can’t thank you enough for what you did during my mother’s death; we are all grateful, the entire Mamprugu.”

He stated that Otumfuo’s actions demonstrate his commitment to unity and his family as a whole, which Mamprugu appreciates.

Read Also  check out - Fantana assures ghanaians ; claims there will never be a fight between her and Wendy Shay

He now claims that he has no mother or father and that Otumfuo has demonstrated that he is a father to all.

“You were truly involved in the funeral; you demonstrated that I am your son; now that I have no mother or father, you are my everything, which is why we are here today to express our heartfelt gratitude.”

Dr. Bawumia was at the palace with his family and some New Patriotic Party executives.