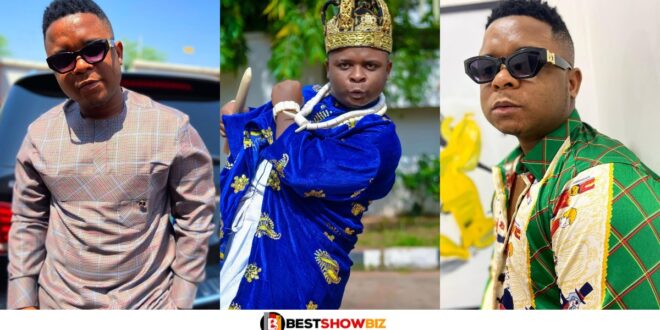 “I didn’t know I was popular” – Enock Darko

Enock Darko, also known as ‘watabombshell,’ is a talented Ghanaian-born actor, comedian, and brand influencer who understands how to fit in with any character provided to him by film directors and producers.

Enock, who attended both primary and secondary school in Ghana, broke into the entertainment industry after being second runner-up in season two of Tv3’s ‘Talented Kids’ show in 2011. (held in Ghana).

Watabombshell, who was born on December 31st, came to Instagram to wish himself a happy birthday and shared with his followers some old photos of him on set (presumably from the early days of his career), saying he had no idea he was that popular.

“Trust me, when I first started, I had no idea how popular I was,” he claims. I was simply constantly ironing my clothes and being on time on set and always ready, even if I hadn’t eaten yet.

And I recall one day when I was practicing, they asked me, “Won’t you rest set is over?” I was like am putting my humorous styles and lines down one day will be acting with big actors but had no clue will never come to Nigeria, am grateful to everyone who supported me Also, your fans adore you all.

Enock is a Ghanaian actor who is now conquering the Nigerian Nollywood film business. He has worked with several of Nollywood’s biggest stars, including Patience Ozorkor, Destiny Etiko, and Ngozi Ezeonu, among others. He has appeared in almost sixty films.

When it comes to every single episode of his movies, the all-grown gentleman Enock Darko is always the icing on the cake, and he has gathered tremendous support and acceptance from Nigerian movie enthusiasts all over the world.