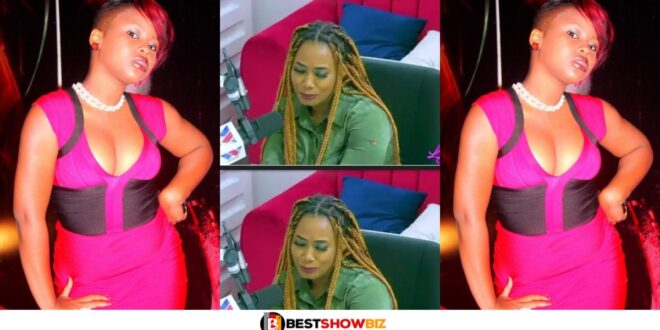 “I dated 5 men at a time, took their rings, collected my dowry and later broke up with all of them”- Lady reveals

Pennie, the actress, talked about her love life and how she dated several men and took their dowries before breaking up with them.

Men are wicked, according to Pennie; they lie to women, and she did the same to them by duping them and pretending to love them; they collected money and gifts, including her dowry money.

“I was followed by five men. You know, when someone loves you, they believe everything you say, no matter what, and for us girls, when a man loves you, he becomes weak and a fool. Even though I had no feelings for them, I deceived them. I was only interested in their money. I lied to them, collected money as my dowry, and at the end of the day, I put it in a bag and there was nothing they would do to me.

I told them straight out that I didn’t love them. I was after their money. I got what I desired. I felt no remorse about it.”- She said

She claims that men are heartless and believe they are the only ones who matter. She claimed that those men were madly in love with her and planned to marry her because she is a well-known actress in Tanzania.

She blamed men for her actions and advised men to stop lying to women and breaking their hearts. Pennie revealed that she does not love any man; she is only interested in their money and other benefits.

Read Also  He Wanted To K!ll Us Too; Man Discloses Secret Behind The [email protected] Of An Innocent Nurse And 1-Year Old Baby