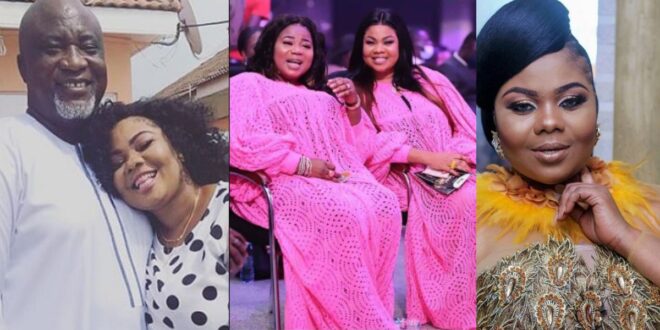 Hopeson Adorye, the husband of Ghanaian gospel musician Gifty Osei and an NPP politician, has disclosed that he has difficulty distinguishing between his wife and Abena Serwaa Ophelia.

If one isn’t vigilant, these two female musicians may potentially be mistaken for twins. Gifty Osei and Ophelia Serwaa have a startling similarity, which has shocked their followers.

Not only are the fans stunned, but Gifty Osei’s husband has confessed that he was once perplexed when he saw his wife’s startling resemblance to Abena Serwaa.

He posted a picture of his wife and Abena Serwaa with a hilarious caption on his Facebook profile, which has since gone viral.

Hopeson was perplexed after hearing the two women refer to his wife Gifty Osei as “Tong,” which means “Vjayjay.”

He expressed himself as follows:

The first day I met them, I was confused as to who was my Tonga. Empress Gifty Adorye and Abena Serwaa Ophelia