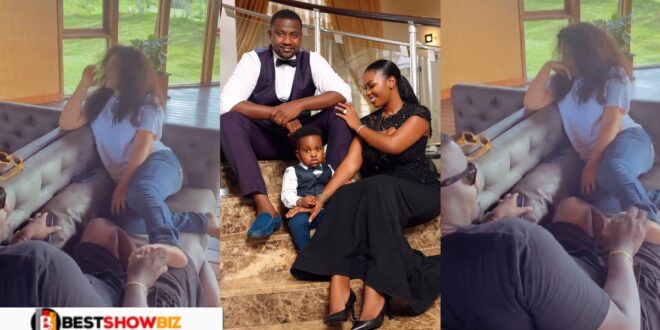 The wife of actor-turned-politician John Dumelo has warned Nadia Buari to leave her husband alone after a video of John kissing and massaging Nadia’s leg went viral.

Despite the fact that they are both married with children, John Dumelo and Nadia Buari are colleagues in the film industry who have developed an enviable friendship behind the camera.

Due to the fact that their friendship appears to be too good to be just friends, some people on social media believe the two are having a secret relationship.

In response to a video of John Dumelo massaging and kissing the feet of actress Nadia Buari, which was shared on social media, there were a variety of responses.

Read Also  Video: Florence Obinim shares the secret of how she has been able to stay with Bishop Obinim for 17 years despite all the problems

Nadia and John appeared to be having a good time during the massage in the video, and they even teased John Dumelo’s wife to come over and see what he was doing to the legs of yet another woman.

Gifty shared the video and asked her fans if she should react to it or just let it go. Her fans agreed that she should let it go.

Not waiting for advice from her fans, she issued a warning to Nadia Buari, telling her to leave her husband alone and go look for her missing daughter instead.

While some internet users believed the video to be harmless and assumed it was normal, others expressed concern that the relationship between Nadia Buari and John Dumelo should be investigated because mere friends could not act in such a manner.

The fact that they are both married with children adds to the complexity of the situation.