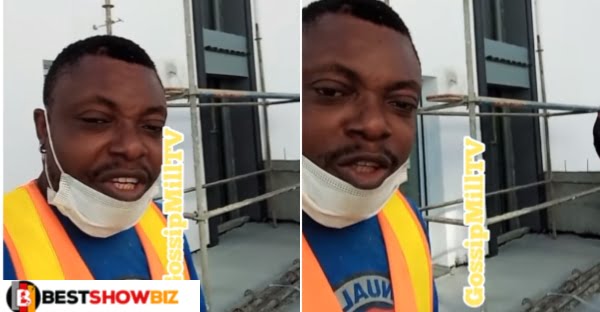 “I carry bricks in Europe to get something to eat, please reduce money demands” UK Borga Tell Ladies

A Nigerian guy has gone viral with an outraged video depicting the type of job he undertakes in Europe.

He confessed that he gave up all of his comforts in Nigeria to work as a laborer in another country. The man expressed his feelings in a video of himself at work, explaining that he had been carrying bricks all day.

The man stated in a tape reshared by @gosspmilltv that girls who overbill men in Europe believing they’re making easy money should beware.

“We are truly suffering here in Europe, working hard for our money; please Ladies, stop billing us so much,” the guy lamented.

Read Also  "I can't continue living" – Students writes in a letter before k!llῗng herself after her boyfriend broke up with her. [Details]

He emphasized that when he begins spending his money, no one should ever remind him that he obtained it illegally.

The man displayed his fellow Nigerian friend, who he said left his Lexus at home to work as a laborer and survives mostly on bread.