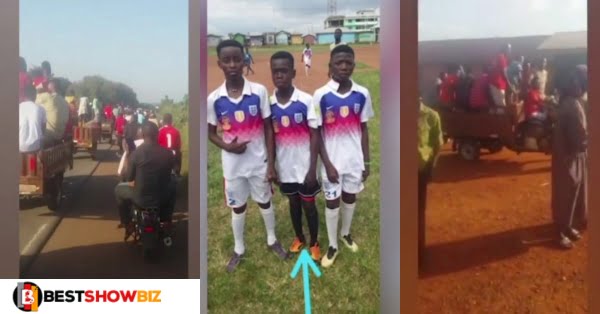 “I care less If He D!es” – W!cked “Aboboyaa” Driver Says After knocking down a 12 years old boy

Moro, a tricycle rider, killed a 12-year-old child after throwing him off his tricycle. The youngster died after collapsing with his neck on the ground. Sumaila Ibrahim, nicknamed Agogo, is a teenage footballer from Akomadan, Kumasi.

He and his friends were returning from training to their home in New Techiman. They didn’t have a car, so they rode with a man on his tricycle (Aboboyaa), which he was transporting from his farm.

Moro and a buddy were returning from their farms when the friend asked Moro to pick up the children, but Moro refused. Some of the children hopped inside the truck when he stopped at a junction to join the main road, despite his request that they should not do so.

One of the children stated that he did not join them since he knew the man was very wicked. Moro told a friend that because he did not allow children in his Aboboyaa, he should not be held responsible if they died.

He drove at high speeds and did not stop to let the children out of the carriage. Some of the kids were able to jump out of the Aboboyaa. Sumaila was the last to alight. The rider drove past the youngster’s house at full speed, prompting the small boy to attempt to jump out.

Unfortunately, the Moro collided with a deep pit, and the youngster fell on his neck at the side of the road. Moro and his friend went without looking back to see what had happened to the boy.

Moro’s wife claims that when her husband returned home, he told her that he had gone to dump several children into the bush and doesn’t care if they die or not. When the police came after Moro, his wife revealed this to them.

A passing tricycle rider (Pragyia/Yellow Yellow) noticed the youngster in the bush and went to ask for help. When he arrived at the hospital, he was confirmed dead. In the bush, he had bled to death. Because he was a Muslim, his body was returned to his family to be buried.