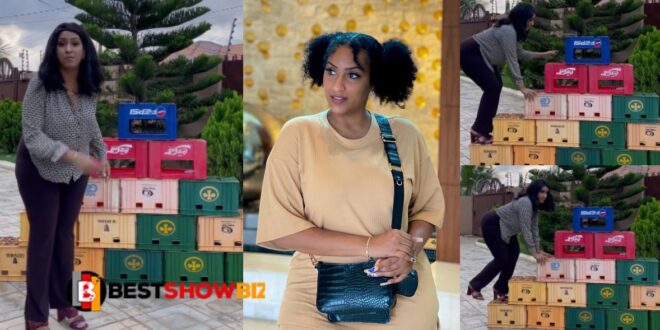 I can’t k!ll myself: Says Juliet Ibrahim as she joins viral crate challenge in new video

Actress Juliet Ibrahim has made her fans laugh so loud after opting to take part in the recently terrifying crates challenge, which has become an international fad.

The actress placed a lot of boxes at her home in a video seen by Bestshowbiz.com as she defied the odds to replicate the new trend.

Prior to attempting the challenge, the actress stated that she had seen a trend of individuals climbing boxes and wanted to give it a try herself.

She went on to say that she likes challenges and did not want to miss out on the chance to attempt this one and succeed like a few others.

After her ‘opening remarks,’ the actress proceeded to the boxes and began her ascent to the top with caution.

The actress, who was competing in high heels, took the first two steps, became stuck for a few seconds, and then placed her hands on the boxes.

Juliet Ibrahim changed her mind and performed a ‘U-turn’ after a few seconds of contemplating the consequences of her conduct.

Juliet Ibrahim said that she was not willing to ‘kill herself’ over a task that would elicit laughter but not earn her any money once she regained her footing on level ground.