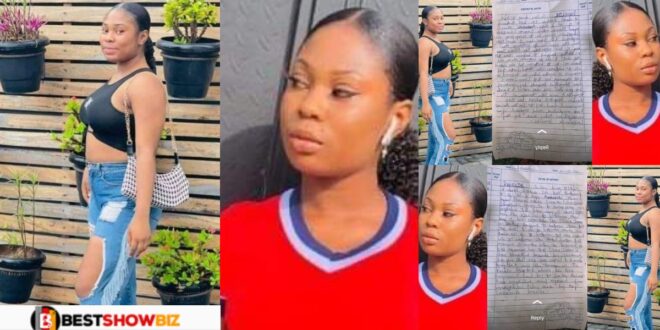 “I can’t continue living” – Students writes in a letter before k!llῗng herself after her boyfriend broke up with her. [Details]

Olivia James is a Library and Information Science (LIS) undergraduate student at Akanu Ibiam Federal Polytechnic Unwana in Ebonyi State who committed suicide after her boyfriend broke up with her.

Olivia, who ran a cake and small chops business while attending school, is said to have consumed sniper after her boyfriend dumped her days after her birthday.

She was rushed to the hospital, according to reports shared online by her classmates, but she was pronounced dead upon arrival.

Following her birthday on October 6, it is claimed that she had a misunderstanding with Henry and that he was not returning her calls; instead, when she called him, a woman answered the phone.

Read Also  5 Ghanaian celebrities who are from the northern region of Ghana.

She allegedly left a message for one of her friends to inform her of her intentions before killing herself, but the friend wasn’t online at the time, and by the time she saw the message and they rushed to Olivia’s apartment, she had already killed herself.

The boyfriend, Henry, is said to be on the run.