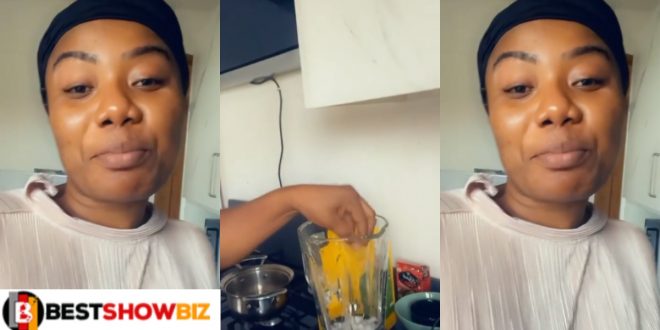 Ghanaian television journalist Bridget Otoo has opted to criticize herself for her lack of cooking skills.

Bridget posted a video of herself steaming chicken on her Instagram page, in which she expressed worries over the quantity of salt she should use.

While deliberating on how to get the right quantity of salt, she shouted about how disgusted she is in herself for not being able to prepare a meal.

She had earlier on taken to Twitter, where she put down a list of humorous requirements for the man with whom she would like to spend the rest of her life.

According to the journalist, she is looking for a man who will be able to cook and clean the house on a daily basis when they ultimately tie the knot. Her hilarious tweet sparked a lot of discussions, and she received a lot of negative feedback.

“I’m looking for a Ghanaian man, marriageable material who can cook and clean 24/7 to marry,” she wrote on Twitter.

I’m looking for a Ghanaian man, marriageable material who can cook and clean 24/7 to marry