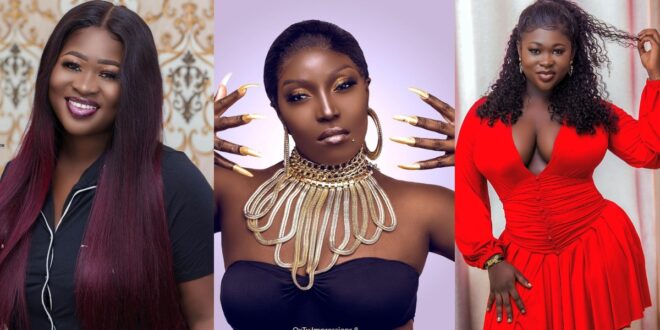 “I called Eno to Plan our beef to give her attention, but she never thanked me after”- Sista Afia

Sista Afia, a Ghanaian musician, has made startling disclosures about the beef between herself, Eno Barony, and Freda Rhymz.

If you recall, during the Covid-19 lockout, these three female musicians treated Ghanaians to a series of back-to-back songs, showcasing their rap dexterity.

It was because of this beef that Ghanaians learned how versatile Sista Afia was and how strong Eno Barony was at rapping.

The new gist, according to Sista Afia, is that she orchestrated the whole beef.

During an interview with Fella Makafui on “The Fella Show,” Sista Afia revealed the details.

Read Also  "Sista Afia was indirectly dissing herself not me"- Sister Derby Reacts to diss song.

The singer revealed that she called Eno Barony to tell her that she was doing something and that she would be interested in joining, and Eno accepted.

Her goal, according to her, was to get all of the female artists in the industry together to form a big family, but she was stabbed in the back.

She went on to state that after giving Eno Barony the attention she deserved, she has never called her to thank her.