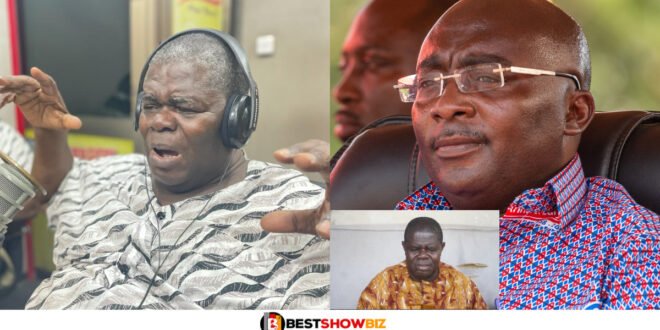 Psalm Adjeteyfio, a veteran Ghanaian actor turned professional beggar, has disclosed how he spent the Ghc50,000 he received from Vice President Bawumia.

He said that he spent Ghc 20,000 on an old taxi for his child who couldn’t find work.

And with that, the Veep’s Ghc 50,000 contribution, which was meant to cover his housing for the next five years, was squandered.

Following a new outcry after he came out begging again, Psalm Adjeteyfio detailed how he spent the money.

Vice President Bawumia had given the actor a huge Ghc 50,000 gift during his last begging spree.

Read Also  It is not true! Fella Makafui Hasn’t Given Birth Yet – Kwesi Aboagye

The payment was expected to cover for five years of rent and the remainder for his care, since he was pleading for money to pay rent.

TT, on the other hand, chose to spend it his way.

“I sat down quietly and taking note of the situation, that the whole world has got their eyes and tongue on the money, so I should be very careful of how I use that money…I got two plots of land which I paid for one with cash straight away, I’m yet to pay for the other one.

“My son says he wants to be a driver, he’s been to driving school but for two years he’s been at home…so when the Vice President gave me the money, I bought a Ghana-used taxi in a very good condition for him. He has right now registered at a station and he plies that road,” he said.